When I was a student I bought a TI-68 calculator, which has served me well for all these years. Unfortunately it has become unreliable of late so I decided to find me a replacement to use at work. While the hexadecimal and binary support on the TI-68 are very useful, all I really need nowadays is quite simple since it will be mainly used for the "back of the napkin" type of quick calculations. Knowing that Commodore also used to create calculators, I decided to find my self one to use in the office, instead of the TI-68. Here is a short "show and tell" about the two calculators that I found.

Commodore was founded in early 1950 to sell typewriters and (mechanical) adding machines. When the technology moved on from mechanical adding into electronic calculation the company started to sell calculators under the Commodore brand. Initially these were rebranded Japanese products, but after 1969 Commodore started manufacturing their own designs, using mostly semiconductors from Texas Instruments.

This continued until 1975 when Texas Instruments started to sell their own calculators at a much lower price than Commodore could even buy the semiconductors for that they used in their calculators. This caused two interesting effects. First, it made Commodore's Jack Tramiel buy the semiconductor manufacturer MOS Technology so that he was no longer dependant on others. This in turn meant that Chuck Peddle (main designer of the 6502 CPU) become part of Commodore, setting Commodore on the path of designing and manufacturing computers.

The second effect was that Jack Tramiel never forgot how he was treated by Texas Instruments. A couple of years later he paid them back by selling the Commodore VIC-20 so cheap that Texas Instruments had no chance of selling their TI-99/4A home computer at a profit and consequently they closed their computer manufacturing branch forever.

The first Commodore calculator I found was the "F4902" from 1978, which was manufactured in Hong-Kong and aimed at the financial market (hence the "F" in front of the model number). It runs of a 9V battery but also supports an external power supply. For its display it uses a row of eleven red LED 7 segment displays. The case is made of black plastic with a dotted texture. 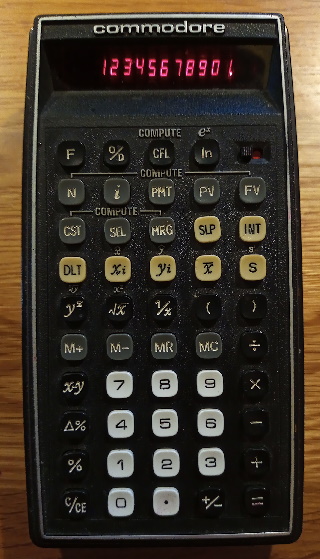 Even though most of the (financial) functionality is no use to me as an engineer, for my simple calculations it works just fine. With these old calculators there is a tendency to get rounding errors where you end up with a value of 4.9999999998 instead of 5, but that is not necessarily a problem.

This type of display does use quite a lot of power and as a result the battery does not last very long with continued use. The calculator will blank the display when not used for a minute and only display a dot as an indicator that it is still powered on. The display is difficult to read when not faced exactly straight on, which is caused by the little lens tube that each individual digit lives in. After a couple of months I decided to find another calculator but one that used a different display technology.

This time I actually did some research before opening up eBay. I ended up with a shortlist of around 4 different models. Of these only 2 I could find on eBay, and one of these seemed to attract pretty high prices. The only one that I could see plenty of was the SR-1800, but even these (with mains adaptor, manual and box) were not cheap enough to my liking. In the end I kept on bidding on odd ones here and there until I finally won this one, no manual, box or adaptor included - but cheaper than I originally expected to spend on it.

The SR-1800 was manufactured in 1976 in Japan, which makes it 2 years older than the F4902. This did indeed surprise me when I realised this, as I still think that the SR-1800 looks the more modern of the two. The calculator uses a vacuum fluorescent display (VFD) of 11 digits (split into an 8 digit area and a 2 digit area) and runs on 3 AA batteries. It also has a connector for powering it from a mains adaptor. 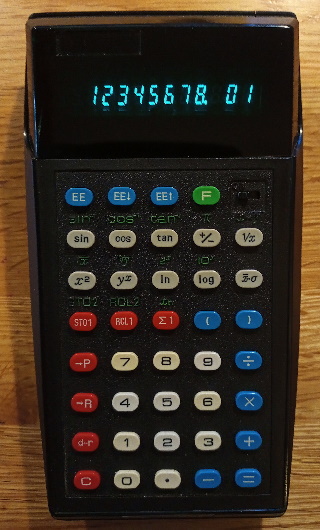 The "SR" in front of the model number indicates that it is an engineering/scientific model, which means that it should be more up my street than the F4902. And it surely is. The display is split in two where the eight digits on the left show the current value and the two digits on the right show the power of 10. This is known as "scientific notation" and can be seen as a sort-of floating comma notation used to display rather small or rather large numbers more conveniently.

As a simple example of this, the number 5000 can also be written as 5 x 103, which on the calculator becomes "5  03". This trivial example may seem to make it less convenient rather than more, but if you're doing timing calculations on a 15 µF capacitor then a value of "15 -06" is much easier to scan than 0.000015. The EE↓ and EE↑ keys make this even more useful since they step the power of ten down and up respectively, while keeping the value of the number the same. When the answer of a timing calculation is "21.9 -08" seconds then pressing EE↓ changes it to "219 -09", which to an engineer means it is 219 nano seconds.

Now I need to find myself a manual and locate any other functions that may be as useful to me as the scientific notation is.

The F4902 works fine as a calculator, but the narrow viewing angle of the display makes it less easy to use on my desk. I could find myself an SR4912, which is the scientific version, but it uses the same display. And even though the SR4912 uses scientific notation it does not seem to have the EE up/down buttons I like so much on the SR-1800.

The SR-1800 ticks all boxes for me, not only functionality wise but also due to the way it looks. My dad has a Casio Personal M1 from since I was a kid, and I always liked its fluorescent display, so I'm not surprised that I've been drawn to a calculator with a similar type of display.

After a couple of months of use I still enjoy getting the SR-1800 out and use it on a regular basis. And unlike the F4902 it does not get in my way and actually makes things easier for me. The SR-1800 is still my main calculator at work, where the F4902 has been moved to my desk at home to be used less frequently.

A random collection of articles about random (retro)tech subjects...